What is Colon Therapy?

Colon hydrotherapy or colonics is a safe and effective method of gently cleansing the large intestine by introducing a small amount of water into the colon using FDA approved equipment.  Waste materials and toxins are softened and loosened, resulting in evacuation through natural peristalsis. 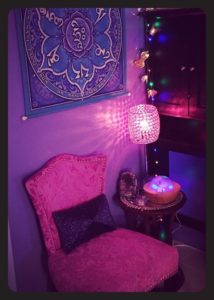 During the session, the client comfortably lies on their back during the session and is always modestly draped.  A small disposable tube is inserted through the rectum, where a waste tube is connected to the end.  Water and waste exit through the waste tube which allows the therapists and client to see what is being eliminated from the body.  The temperature of the water is adjusted throughout the session to achieve greater results.  The process of filling is repeated several times throughout the session, which is
approximately 45-50 minutes long.  Each person is unique in the number of sessions they require initially and the frequency in between visits for maintenance. On average I suggest a good series of 6 coming in 1-3 times per week.

Massage, acupressure, trigger points, reflexology, and H-Wave™ are used during a colonic. H-Wave™ increase blood flow and moves lymphatic fluids (more effective than a lymphatic massage), which speeds up the release of toxins into the large intestines then getting flushed out during the colonic.  I am the only colon therapist currently using the FDA approved H-Wave™ instrument in conjunction with colon hydrotherapy. Clients notice better releases and results when used in conjunction with a colonic.

What is the history of Colonics?

The idea of cleansing ones colon has been well documented in many civilizations dating as far back as 5000 years ago.  In fact many doctors performed colonics on a more primitive gravity fed system on all patients in the early 1900’s up until the advent of modern medicine/pharmaceuticals.As early as 1500 B.C., the ‘Ebers Papyrus’, an ancient Egyptian medical document, described the many benefits of colon cleansing.  In ancient times, the practice of cleansing the colon was administered in a river by usin
g a hollow reed to induce water flow into the rectum.
Centuries later, the benefits of colon lavage continued to surmount. Colon irrigation was commonly used among Europeans to assist with maintenance and promotion of overall health. Enemas were frequently used for abatement of fever, anxiety and illness. More recently, in the early 1900’s, improvements in colon hydrotherapy devices allowed for a more complete cleansing of the large intestine. Implementation of these technological advancements brought on times of colonic popularity and also times of rejection. Unfortunately, advanced colon irrigation was, at times, administered by the unskilled and poorly trained. This proved to be detrimental for the support of the general population and medical profession.

Despite the difficulties in the early 1900’s, the value of colon hydrotherapy continued to be recognized by several medical doctors. Most noteworthy were James A. Wiltsie M.D., Joseph Waddington M.D., and John H. Kellogg M.D.

In the early 1900’s Dr. John H. Kellogg M.D. used forms of colon therapy on several thousand of his patients.  In a 1917 edition of the Journal of American Medical Association (JAMA) Dr. Kellog reported that in over forty thousand gastrointestinal disease cases, he had used surgery in only twenty cases.  The rest were helped as a result of cleansing the bowels, diet and exercise.

Dr. Waddington stated , in his work “Scientific Intestinal Irrigation and Adjuvant Therapy”, the following: “Abnormal functioning of the intestinal canal is the precursor of much ill-health, especially of chronic disease. Restoration of physiological intestinal elimination is often the important preliminary to eventual restoration of health in general”.

Dr. Wiltsie offers, “our knowledge of the normal and abnormal physiology of the colon and its pathology and management has not kept pace with that of many organ systems of the body.  As long as we continue to assume the colon will take care of itself, it’s just that long that we will remain in complete ignorance of perhaps the most important source of ill health in the whole body”.

Since this time, colon hydrotherapy equipment and methods of practice have improved even further. Therapist training is now standardized through accrediting associations and colonic equipment boasts greater effectiveness along with the added security of regulation from the FDA.

People are rediscovering the benefits of this natural, safe and convenient method to cleanse the colon and promote wellness.